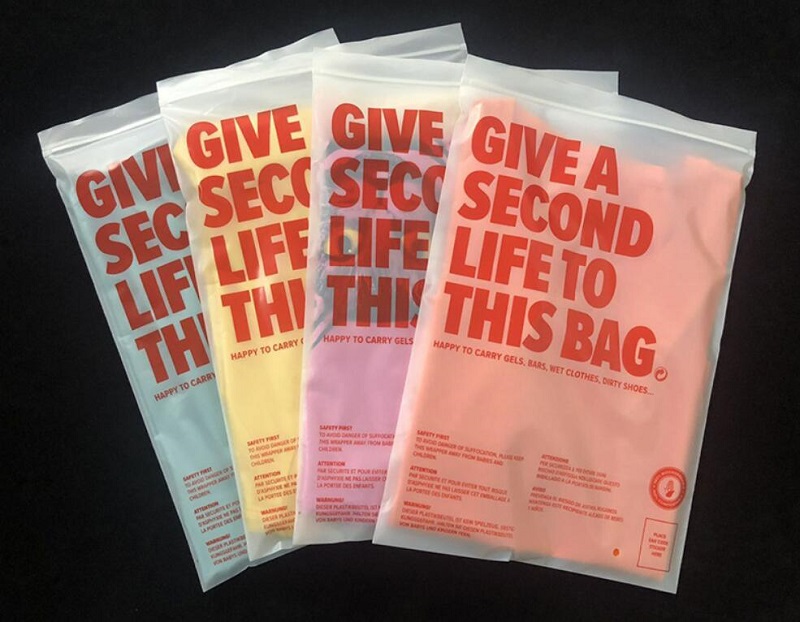 A Compostable Plastic Bag Cycle
As a responsible choice with the environment, unlike of the plastic bag, it shows the compostable bags as a measure of the decrease the pollution and toxic waste for the health of the world and the society.

The compostable bag lifecycle is:
Production: the corn starch is extracted from the raw material, a natural polymer obtained from the corn starch, the wheat or the potato.
Then the microorganisms transform it into a smaller molecule of lactic acid that works as a base for the production of polymer chains of polylactic acid.
The crosslinking chains of polymeric of the polylactic acid give place to the biodegradable plastic sheet that works as the base for the elaboration of a lot of nonpolluting plastic products.
This plastic sheet is transported to production companies and the transformation of the plastic bags.
Then they’re distributed to commercial establishments for the uses and commercialization of the compostable bags in their daily life.
The bag is used and then it becomes waste (estimated time of use: twelve minutes)
The process of biodegradation becomes the estimated time from 6 to 9 months.
The bioplastics extracted from the corn starch has become the never-ending and renewable resource, presents short and closed life cycles such rates of big farming, low water consume, impulse the growth of the cropping sector and it makes stronger the extensions of crops in the path to give up. In the all process of the life cycle, the agents of contamination have decrease until the 1000% in comparison with the process of plastic bag production.
The particularity of a Compostable bag is that they can be used as fertilizer for home plants, and with it make them grow healthy and motivate the reutilization of plastic bags. With the AMS Compostables bags, besides of generating reusable disposal, it is avoided to accumulate unnecessary waste for sanitary landfills and to reduce the congestion of garbage with the objective of improving the public health conditions for society and the environment.
The average person uses a typical plastic bag for as short a time as 12 minutes before throwing it away, never thinking of where it may end up.
Yet once consigned to a landfill, that standard grocery store tote takes hundreds or thousands of years to break down — much more than a human lifetime. Bags make up an alarming amount of the plastic found in whale stomachs or bird nests, and it’s no wonder — globally, we use between 1 and 5 trillion plastic bags each year.
Biodegradable plastic bags are marketed as more eco-friendly solutions, able to break down into harmless material more quickly than traditional plastics. One company claims their shopping bag “will degrade and biodegrade in a continuous, irreversible and unstoppable process” if it ends up as litter in the environment.
In a study published this week in Environmental Science and Technology, researchers put supposedly eco-friendly bags made from various organic and plastic materials and sourced from U.K. stores to the test. After three years buried in garden soil, submerged in ocean water, exposed to open light and air or stashed in a laboratory, none of the bags broke down completely in all the environments.
Sponsored
In fact, the biodegradable bags that had been left underwater in a marina could still hold a full load of groceries.
“What is the role of some of these really innovative and novel polymers?” asked Richard Thompson, a marine biologist from the University of Plymouth and the study’s senior author. A polymer is a repeating chain of chemicals that makes up a plastic’s structure, whether biodegradable or synthetic.
“They’re challenging to recycle and are very slow to degrade if they become litter in the environment,” Thompson said, suggesting these biodegradable plastics may be causing more problems than they solve.
What the Researchers Did
The researchers collected samples of five types of plastic bags.
The first type was made of high-density polyethylene — the standard plastic found in grocery store bags. It was used as a comparison for four other bags labeled as eco-friendly:
A biodegradable plastic bag made in part from oyster shells
Two kinds of bags made from oxo-biodegradable plastic, which contain additives that companies say helps plastic break down faster
A compostable bag made from plant products
Each bag type was placed in four environments. Whole bags and bags cut into strips were buried in garden soil outdoors, submerged in salt water in a marina, left exposed to daylight and open air, or sealed in a dark container in a temperature-controlled lab.
Oxygen, temperature and light all change the structure of plastic polymers, said Julia Kalow, a polymer chemist from Northwestern University, who was not involved in this study. So too can reactions with water and interactions with bacteria or other forms of life.
What the Scientists Found
Even in a tough marine environment, where algae and animals quickly covered the plastic, three years wasn’t long enough to break down any of the plastics except for the plant-based compostable option, which did disappear underwater within three months. The plant-derived bags, however, remained intact but weakened when buried under garden soil for 27 months.
The only treatment that consistently broke down all of the bags was exposure to open air for more than nine months, and in that case even the standard, traditional polyethylene bag disintegrated into pieces before 18 months had passed.